Painting doesn't send me to some lovely zen-state where time no longer exists; always it is simply a chance for the monkey mind to rant (and rant) about awful things while the rest of my brain is occupied, and every millisecond is filled with rants and the petty stupidity of thought, even as whatever it is I'm making is being made (or making itself, maybe. I don't know).

And I get frustrated so easily. I mean, it's ridiculous, and has been proved over and over again, but when drawing, like, say, trying to get that hand right, I always, always despair that it will never work. Every single time. It always does, but that knowledge, that experience, never seems to take.

It's the same old block, I suppose, one that I've been trying to get around for several years now. One that I have in general left off fighting, because fighting it, rebelling against it, has not only proved to be useless but I swear only makes it stronger. So maybe this making art every day thing, on schedule, and with the intent to check in daily and show others, is just not a good idea for me. I can never tell. I'm not the type to force myself through something; I have found that it inevitably harms me in the process.

So, this is what I tried to paint today. I went at it not knowing what it was going to be, and not caring, either, or so I thought. But it got to a point where trying to decide what to do with it, or trying to judge what was the appropriate next step just met with all this, not resistance, I don't quite think, but all this stupid other stuff coming up, to the point where I was nearly in tears and just said fuck it. Fuck all of this. Now. 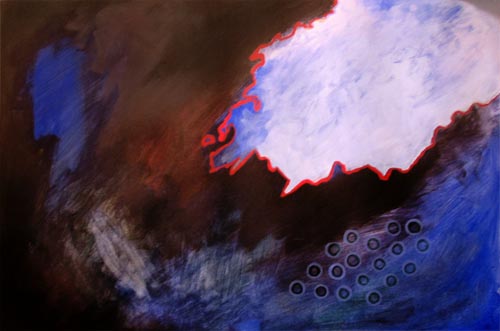 So I left off.

I swear, the only reason I paint is for the end result. Now, it's true, I don't really want to know everything about what it will be, and I want it to be its own thing—like a spell, where you say, I want this result, or better. It's that or better part that seems to fill itself in. Divinely? Maybe. Probably. And that's good.

I'm beginning to see it a bit now I think, this block, and what it is constructed out of. It all comes back to the hoarding, my father's hoarding, and the resulting neglect that was all a piece of it, and of being told, and shown, that my needs (really, anyone's needs but my father's) were not just unimportant but completely and quite impartially irrelevant. Personality disorder on my father's part, you see. I don't really want to get into any of it here, and I certainly hadn't planned to (that is what the hoarding blog is for), but, it is kind of the big issue I'm dealing with right now. And if there's one thing I've learned about myself is that things that are important to me permeate my entire life. I don't see how they can't, really.

So I think really this comes down to some part of me having been taught that I am simply not allowed to do what I want, to have what I desire, to behave as I like. And when I try to do any of those things, I am still coming up against the idea that I shouldn't, and I am bad. I know, that is the language of a child there, isn't it. Well yeah.
Posted by Thalia at 6:37 PM

How brave you are! First of all, you said, "fuck." I admire that you just put it out there--exactly how you feel, no filters, said what needed to be said. I think we all struggle with the "process." I know I do. Can't seem to get to the "art" without the process. From what you are saying, it seems that you need to go through the process, too, and not around it. Whether you realize it or not, feeling block, raging against it/not raging against it is part of healing and coping that we have to do in difficult situations. Don't fight it. Let it do what it needs to do. And, my goodness, this piece that you have created is so expressive--so full of angst, anger, and then that beautiful clarity that breaks through it all in that spot of light blue. Go ahead, hate the process. Then just do it anyway. This work is stunning.

Well thank you Sandy, though, really, I say 'fuck' all the time.

The thing is, though, I've been hating the process for ages now, and still been doing it anyway. I can't see that it has made any difference. I'm thinking it's time for another approach, though damned if I know what that will be.

Like looking at that block and unbuilding it. Seeing what it is made out of and then consciously taking it apart, stone by stone, and then digging out the foundation, raking it smooth, and planting grass there.

Funny (or not) that that metaphor is what I am pretty much literally doing as I clean up the yard and buildings after my hoarder father. Hmmmm.

Thank you also for the validation of my honesty. That helps a lot.

Also (this is going to be one of those thinky posts where I continue to muse in the comments, isn't it) I didn't used to hate the process. When I was a kid I'd get up every day and make something, and the act of making (as well as the end result) brought me joy. Though come to think of it I wasn't always satisfied with the results, as my technical skills weren't up to creating what I could imagine.