Yesterday I did some journal-type writing; I guess that counts as art, but again, I've got nothing to show (or nothing that I'm willing to show, anyway). Today I played around with little texture maps for Sims stuff (it's a hobby), in the hopes of making a little Etruscan woman (my goal is to make an entirely old Pagan Sim-world). It looks a little odd, since it's a texture map, and stretches to fit around the 3D mesh, which in this case, has two braids in the front, and several more hanging down the back. I had thought that given the shape it would work well with an Etruscan-style hat; but when I tested it in the game it turned out that whoever did the texture mapping had gotten the color for the braids from the top of the head, so they were showing up the same color as the hat. So I think that I'll have to ditch the hat, alas. 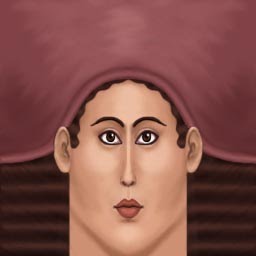