It's Samhain, and we haven't had a frost yet up in my part of New England; we're about two weeks overdue as the average first frost date is the fifteenth.

I did try to garden this year. I have had some success with it in the past. But this year the last week of May I started having some health issues which lasted all the way through to July, and which meant I really had to take it easy physically; and well if you miss June in the garden you'll never catch up.

That, and the critters this year were everywhere. We've had deer since a local supermarket put a giant new warehouse, with diesel trucks and lights running 24/7, right plunk in the middle of a large swath of woods just up the street; between them and the lily leaf-eating beetles (a truly horrific species in the larval stage, yikes) I've had to give up on the front lily garden. And of course we've always had groundhogs, the bastards.

But this year we also had rabbits. And my poor vegetable garden was inadequately fenced. Oh it had been well fortified once; but a couple years of poor maintenance (and luck) on my part meant the defenses were easily breached, and every time I jerry-rigged a fix another hole sprouted. And so anything I planted this year was pretty much immediately nibbled to the ground. That meant no beans, no cukes, no beets, zucchini, summer squash, not even any goddamned radishes, never mind lettuce. Even the stuff I put in as seedlings was eaten, though given that the tomatoes were eaten from the top down rather than the bottom up, I suspect deer rather than rabbits in that one.

All of course except for the one single jalapeno pepper plant. That one they left untouched. But given those health issues I now pretty much can't have spicy food. So I had an abundance of little hot peppers that I couldn't eat.

It was annoying, to say the least.

I used to check on it, though; hope, you know. But all that was left of the tomatoes were these inedible (to me) half-eaten things. So I'd pull them off the plant and chuck them behind the garden, into the tangled thicket of blackberry, wild rose, pokeberry and goldenrod that grew around an old woodpile. I was trying to keep the garden a little tidy, at least.

By the end of the summer I had pretty much given up on the vegetable garden for the year.

Instead we've been cleaning the yard. The short version (if you want the long version, again, check out the Tetanus Burger link on the sidebar) is that my father was a hoarder and the yard is (still) full of junk, though we've been cleaning it for years already. Seriously. It's a big project.

And so one day we were cleaning up a pile of transmissions or engines or something, over by the reclaimed area of my vegetable garden (the spot had once been a large brush pile). And there, in that area overgrown with blackberry, wild rose, pokeberry and goldenrod something red caught my eye. It was this: 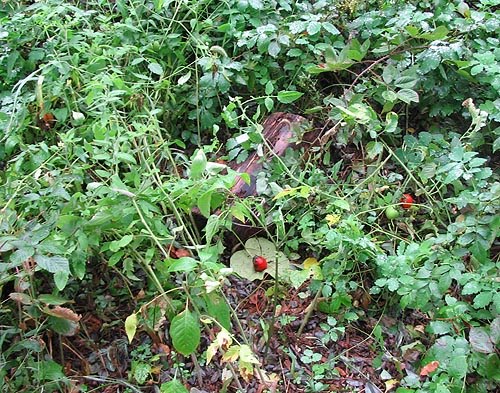 Those are tomato plants growing there, thriving there, among the briers and weeds.

You have to understand, I have never had any luck starting tomatoes from seed, when done in the spring in little peat pots under a grow light. They get all spindly, or damp-off and die. I figured I just wasn't any good at it. So I was rather surprised.

But there they are, out in the open like that, healthy and uneaten.

Things will take care of themselves, I think. Our intent is worth something, even if it works out in ways we would not have foreseen. We can make a harvest of something we did not even realize we planted.
Posted by Thalia at 8:51 PM

Rabbits are so wonderful. Until they get into your garden. Ditto for deer.