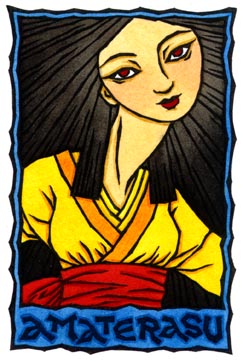 We haven't seen Her in nearly a year, but Amaterasu, the Japanese Goddess of the Sun, is making Her third appearance here. (Her other two: in July of 2009, and early November, 2008.) She is the principal Deity of Shinto, considered the foremother of the Imperial line, and said to have invented weaving, agriculture, and therefore civilization. Her name, given in full as Amaterasu-Omikami, means "The Great Goddess Who Shines in the Heavens."

Amaterasu is the daughter of the first couple, Izanami ("She Who Invites") and Izanagi ("He Who Invites"). After creating the islands of Japan, Izanami and Izanagi then desired to have a child Who would rule over all; and so Amaterasu was born. It is important to remember that Amaterasu is not just an important Goddess, but the supreme Shinto Deity of either sex; in my reprint of Myths and Legends of Japan, which was originally from 1913, the primeval couple ask Themselves "Why should we not produce someone who will be the Lord [sic] of the Universe?" since of course the Deity at the tippy-top of things must be male, from the western author's point of view.

Now, it's true, Japanese myth is not my strong suit, but my feminist nose is smelling some revisioning of the myth. In the story of Amaterasu's parents, Izanami (Her mother) and Izanagi (Her father), came together to an island. Having decided to marry, They set up a ritual pillar, which They walked around in opposite directions (it would be interesting to know Who walked sunwise, and Who walked widdershins, wouldn't it?). When They met, Izanami exclaimed, "How wonderful! I have met a beautiful young man!" This angered Izanagi, however, since He felt He was entitled to the first move, and the first speech, since He was male (and that is specifically the reason given); He insisted They do it over, and when They met the second time, He said, "How wonderful! I have met a beautiful young woman!" And this, according to the legend, made everything right with the Universe.

Yeah, well. That's a pretty literal account of men being rewarded for taking credit for something women have done first, down to the words from our mouths being stolen; and also it strikes me as a pathetically transparent justification for building a society on a sexist foundation. So transparent, that I wonder what is there to prove? It if really is just as it always has been, is there a need to justify it like that? So I wonder if this is a remnant, a remembering in myth, of a time when Japan was not patriarchal. From what I understand of history, Japan does have a matriarchal (or whichever word you choose to describe it) past; the Chinese are said to have been surprised when they first encountered the Japanese tribes, as the leaders of those tribes were often women.

Now Izanami and Izanagi's next child was the Moon-God, Tsukuyomi; and though They thought He and Amaterasu a perfect pair, They argued almost from the first sight of each other. And so Amaterasu rules without a consort. Which She doesn't need anyway, being brilliant, canny, inventive, hard-working, and an excellent archer to boot; and She always uses Her gifts to further civilization.

This week I think it will be about sunshine; specifically, the kind of sunshine that illuminates the dark places. Perhaps it will involve taking credit where it is due, or shining the light on someone else's misappropriation; it may also involve bringing dark areas of your past to light in the name of healing. It may be somewhat painful to look, I fear, but it is a good time, if you choose. Stand in the sun; be aware, and warmed, and visible. The light will prove a great source of strength.

Take credit for the good discarded or buried things that are yours, but also recognize what isn't yours--perhaps shame, guilt, or the like which you have been carrying around with you. This week will provide a very good opportunity to see things with remarkable accuracy and clarity.

She is brilliance, and warmth, and growth. She draws the flower to Her; the plants grow towards Her, longing to reach Her.

Reach for me, unfold yourself, unfurl yourself in my warmth. It is safe here. I am the Truth that stands in the Light, and I will not be denied. I am strong, and intelligent, and prepared to defend myself and you; and I cannot be fooled. Grow towards me; use my warmth and light to grow strong. Remember I am always here, even in the winter; and even if my light is low, I always return. Come out into the light!


References: Larousse Encyclopedia of Mythology
Posted by Thalia at 8:38 PM

Labels: Amaterasu, Goddess of the Week

I hope Amaterasu's appearance means we will soon have warm, sunny days here. This weekend it snowed. *sob*

Oh that's right you're in Canada. Sorry about the snow in May. I think I'd cry too. :(

I read a book a month or so ago but i can't recal who wrote it... :S It was about the history, mythology and botany of the Yew tree. I remember a passage that said that Amaterasu was recorded as a male diety before Amaterasu became female. It was only mentioned briefly and I can't remember where the research came from, sorry... but still, thought you might find it interesting?
I first came across Amaterasu in Tad Williams fantasy novel 'The Dragonbone Chair' - not really relevant because it's not really anything to do with her myths but it still leaves you with a lovely feel for Amaterasu :)

I'm glad you told the story through a feminist lens! I'm currently reading the "Handbook of Japanese Mythology" by Micheal Ashkenazi and here a bit you might find interesting:
"the two deities resolved to walk around the pillar, he from the left, she from the right, meet again and have conjugal intercourse...Izanagi too was delighted to see her, but her reproved her, saying it was unseemly for the woman to speak first. They commenced procreation, but gave birth to a leech child without arms or legs...then to an island. Distressed, they consulted the senior deities, who informed them that the problem was the result of Izanami having improperly spoken first" Once Izanami follows orders, she then gives birth to the islands of Japan.