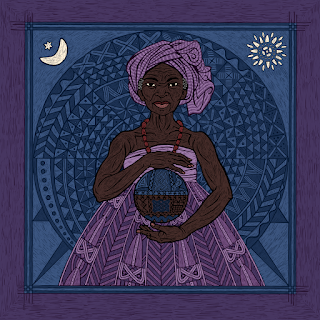 Goodness, I've got a bunch of catching up to do here in regards to new art. First, a digital piece, done to look like a linoleum block print (sort of). It's of Nana Buluku, a Yoruba and Fon Goddess credited with creating the universe. Her children are Mawu, the Moon, and Lisa, the Sun. She is old, very old, and depicted as an ancient old lady. Purple is Her color, and She is associated with water, fish being a symbol of Her. She is shown here holding a carved calabash or gourd, which represents the two halves of the Universe in Yoruba thought--that of the Otherworld, the realm of the dead and the Deities, and the Earth, the land of the living. The pattern behind Her is a spiral meant to echo both galaxies (as She created the Universe) and the whirlpool that in some stories is said to be the entrance to Her home. I've also incorporated some 'sacred geometry' patterns (the circle within a square, and there's a barely-recognizable equilateral triangle in there too) to allude to Her creator role. The designs in the whirlpool are after those on adire cloth, an indigo resist-dyed cloth made by Nigerian women. The fish on Her skirt are after a carved door.

Done for the April Goddess by Request over on my Patreon. I've put this up on both prints (through deviantArt) and greeting cards (through Zazzle).
Posted by Thalia at 3:43 PM

I love all the patterns!

Wow, Debra, are you on the ball! You're getting notifications, aren't you? :)

Oh and thank you, this one was fun!