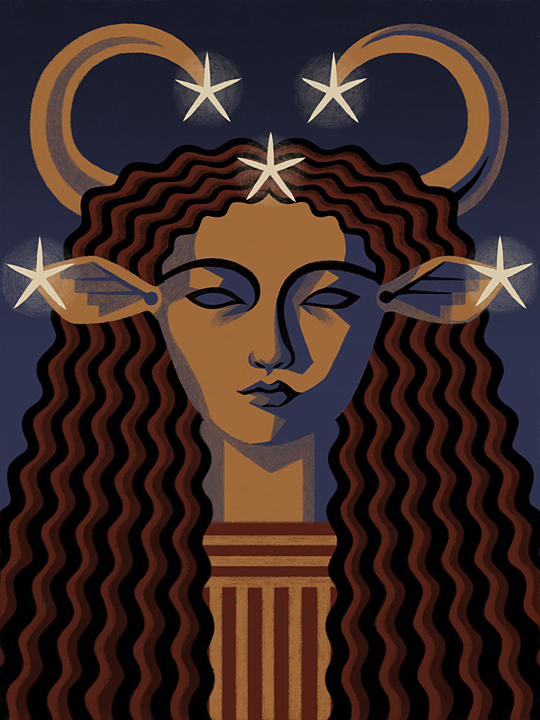 New art of Bat, a very old ancient Egyptian cow Goddess. She's the Goddess of the sixth nome of Upper Egypt, and likely dates back to Predynastic times, as that's probably Her on the Narmer Palette, a votive cosmetic palette that depicts the early King Narmer uniting the two lands. She may also be depicted on the Gerzeh Palette, which shows a stylized cow with stars on the tips of her horns and ears, with another on the forehead. The Egyptians associated cows with the stars and night sky, either because the spots reminded them of the stars (leopards, with their spots, were also associated with the starry sky in Egyptian thought) or because cows have a star-like whorl of hair on their foreheads.

Bat is closely aligned with Hathor, another cow and sky Goddess, and in time Her worship was merged with that of Hathor. She may have origins in a different type of early cow, though, as Her horns are a different shape and curve inwards.

Bat's name is from one of the Egyptian words for soul, the ba, with the feminine ending -t.

This piece is done digitally, in the style of an Art Deco poster; since that art movement was heavily influenced by ancient Egyptian art anyway (as Tutankhamun's tomb created quite a sensation when discovered in 1922) I thought it was appropriate. I kept the palette quite limited, in the style of a lithograph; I used a version of the old Egyptian color scheme (familiar from the jewelry) of dark blue (lapis lazuli), red (carnelian), and gold, though I left out the turquoise.

She's available on both prints (through deviantArt) and cards (through Zazzle).
Posted by Thalia at 7:09 PM

I always learn so much from your posts!