I've been obsessed with this odd technique lately, and though it's having its successes and failures I am determined to get something useful out of it. It uses white gouache as a resist, with ink painted over it. When the ink is dry the gouache (which doesn't stick to the paper) is washed off, leaving the ink behind, usually as outlines. I've seen it done with black ink as outline, but I thought I'd try it with colored inks in several layers of alternating gouache and ink. It's had, as I said, a couple failures so far, but I've got two little pieces that I think do work (the originals are about three inches in diameter). 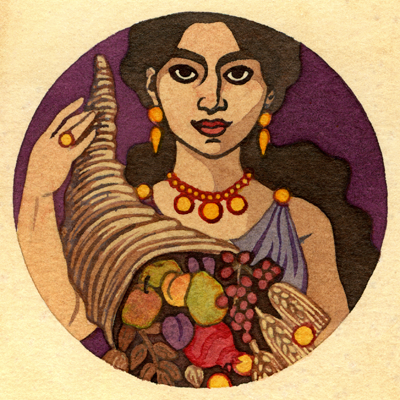 The first one is the Roman Goddess of abundance, Abundantia, shown pouring out the riches of a cornucopia. I was trying to get away from outlines and just do some shapes. Not sure I succeeded. I'm really very fond of (and used to) outlines. 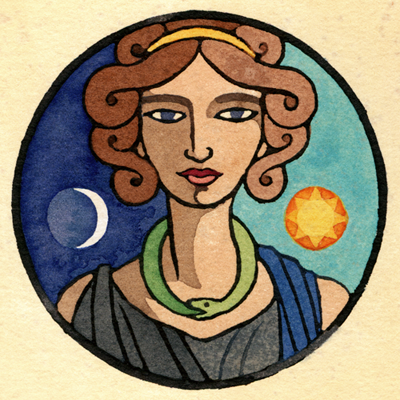 And the second (actually the earlier of the two) is Aeternitas, the Roman Goddess of eternity, with Her traditional imagery of the Sun and Moon (considered eternal), and the ouroboros, or snake biting its tail, symbolic of infinity.

The links go to the Obscure Goddess Online Directory entries for said Goddesses, and incidentally I recently converted all the OGOD stuff over to php. I also redesigned and streamlined things a bit there, which should make it easier to navigate and read all around.
Posted by Thalia at 3:25 AM

I love the calm and serene visage of Aeternitas. That's very comforting somehow.

Thank you. She's probably seen it all already and knows it's not worth worrying about. :)