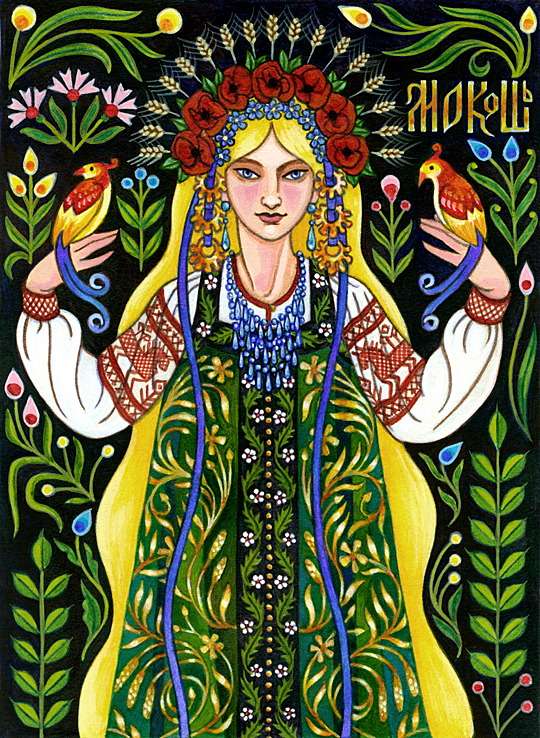 New art of Mokosh, the Russian and Slavic Earth Goddess known from the old pantheon of Kiev, where She had a statue. She is associated with water and weaving, and a traditional Russian embroidery pattern, of a woman between two horsemen, is said to depict Her. She is sometimes shown in the embroideries with upraised arms holding a bird in each hand.

She's wearing a sarafan, a traditional cone-shaped dress, over an embroidered blouse with horsemen on the sleeves, with a Ukrainian flower crown or vinok on Her head. The vinok has wheat, poppies (a common weed in wheat fields), and flax flowers to allude to Her role as weaving-Goddess. The blue drops of Her earrings and necklace, as well as the long flowing blue ribbons are symbolic of water.

The background is after Russian folk painting, and Her name is in Cyrillic lettering (which I hope I spelled correctly!) in the manner of an icon.

The original is five by seven inches, in acrylic on watercolor paper. This was done as the monthly Goddess by Request for July over on my Patreon page. I've also put prints up at my deviantArt site, here.

My Rare One is a proud Ukrainian-Canadian and I know she would love this! I want to buy one of these prints as a gift for her for Ukrainian Christmas next January. (I'd buy the original if it is available but it doesn't sound like it is?) I've checked your Deviant Art page and have a question. Would you recommend getting a glossy, matte or lustre finish? I'm not quite sure what lustre means or how it might look.

No, I don't generally sell the originals (unless it's a commission, of course). They're like my children in some ways. :)

I'm not entirely sure what lustre is either, but here's what deviantArt says about it, and perhaps that will clarify:

'Which is better, glossy, matte or lustre finishes?

It is a personal choice and sometimes can depend on what is being printed.

The Glossy option is perfect for detailed/technical prints or photograph images. However, please note that glossy prints cannot be framed due to the fact that the print sticks to the glass.

The Matte finish offers a flat, texturized finish with little to no glare. Some find this finish is better for paintings and darker prints although it works for any type of image.

The Lustre is wonderful for both, capturing the best qualities from Glossy and Matte and combining them into one beautiful finish. Please note, the Lustre finish has more saturated inks which can sometimes result in a darker image.'

Thanks for your advice, Thalia. Guess I'll stick with what I know is good -- matte. Heading back over to Deviant Art.

wonderful work! and love all the history behind each one