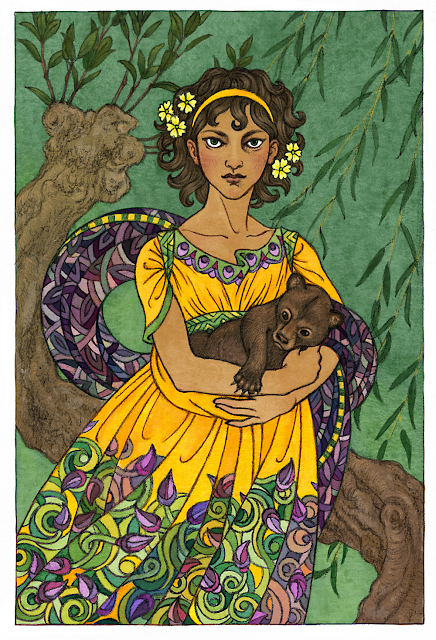 New art of Artemis Brauronia, or Artemis as She was worshipped at Brauron in Greece. Done as the requested Goddess for the month of April over on my Patreon.

The worship of Artemis Brauronia centered on Artemis as protectress of the young and newborn. Her festival was held in the spring, and little girls in saffron-colored robes danced to Her, imitating bears. Those little girls were called arktoi, meaning 'bears'. I have shown Her here as one of Her own arktoi in a saffron robe, holding a brown bear cub. Behind Her are willow branches and an old craggy laurel tree, sprouting again with the new spring.

I tried drawing Her first with long hair whipped by the wind, but She just wouldn't have it. She just wanted short hair. I don't know if it's the shaggy bear thing, maybe. She has primroses in Her hair as they are woodland flowers that bloom early in spring.

I've put Her up as a print over on deviantArt.
Posted by Thalia at 8:55 PM