After all that the next thing I write happens to be a G entry, ha! Isn't that just the way it goes.

This particular plant has been a familiar one since I was a kid. So familiar, yet I never knew its name until recently. It was just that weed that was everywhere and had that weird bright yellow sap. We used to break off stems and use them to write with as kids. But here's a picture of it, taken in my yard today: 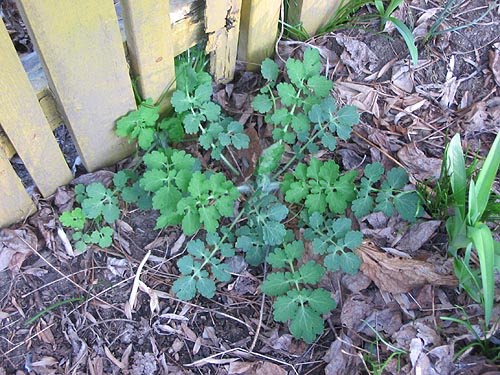 And here's one from Wikipedia, showing its very familiar flowers (since it's not in bloom here yet): 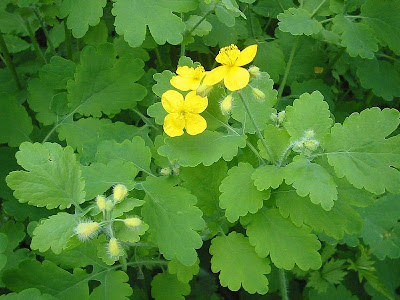 Its Latin name is Chelidonium majus; it is not particularly related to lesser celandine (Ranunculus ficaria), which is a member of the buttercup family, greater celandine being a member of the poppy family (as evidenced by its four petals). The name comes from the Greek word for swallow, khelidon (χελιδων), as its bloom period coincided with the return of the swallows. It's the only plant in its genus, but still called majus, which means 'great' in Latin; I assume because of the common name. And kids, don't mix your Latin and Greek like that. It hurts.

It's not native to the 'new' world, having been brought over by the early European colonists for its medicinal value. From there it escaped, and spread, and spread, until now it is considered invasive in some states (though not in mine).

These days it's considered poisonous, toxic in moderate doses, so, though historically it was taken internally, personally I think I'll steer clear of that for right now.

It has a long association with the eyes: Pliny (the Elder, who died in the eruption of Vesuvius in 79CE) in his Natural History says the juice, boiled with honey, is good against 'films on the eyes' (cataracts, maybe?); Culpeper, who was quite a character, let me tell you (bit of a socialist before his time whose mission was to bring healing to the poor through the use of freely available herbs; he was at one point accused of witchcraft, natch), in his 1653 Herbal also says it is good for sore eyes. He connects the plant with Leo and the Sun, I assume because of its yellow flowers and yellow sap; as the Sun is long associated with the eye, perhaps that is part of where that comes from. He also says it is good for the liver and curing jaundice; again I suspect the yellow color has something to do with that. He recommends it against 'the tetters', what we call ringworm today, though it's not a worm but a fungal infection; one of greater celandine's common names was thus tetterwort. He also says 'It is good in all old filthy corroding creeping ulcers wheresoever' and man, I just gotta say Nicholas Culpeper is a real hoot sometimes. And then he goes on to grouse about how lesser celandine is misnamed, as any idiot can tell it's nothing like greater celandine and obviously unrelated (I paraphrase, but not by much, honestly; seriously, go read the Wikipedia article on him—his sarcastic use of all caps is genius).

But then he says something really interesting. He says that 'alchymists' use greater celandine to make a substance (after a lot of work, as usual with alchemy) that is 'sufficient for the cure of all diseases'. I'm not an alchymist myself, but that does sound rather close to the famed Philosopher's Stone, doesn't it?

The juice of the plant can irritate the skin (though I've been yanking it out of my gardens for years and have never noticed anything), and was used to treat various skin diseases, including warts, which the fresh juice is said to dissolve, giving it the really quite wonderful name of wartwort. It was also called swallowwort (from the Greek I assume), felonwart (a 'felon' being an inflammation of the fingernail), and kenningwort ('kenning' being related to sight, I think in this case pretty literally, given the connection with the physical eyes).

Those are all its traditional uses. Now to the magical ones, as they say. A.J. Drew in his Wiccan Formulary and Herbal says it transforms bondage into love; and Cunningham, in his Encyclopedia of Magical Herbs says it 'aids in escaping unwanted imprisonment and entrapments of every kind'. Both say to effect these changes one should make a sachet with the leaves, and carry it on the person.

As to my own experience with this plant, I suppose I should first say that I don't really have much experience with any plants, at least magically speaking; these articles are going to be, of necessity, more about book-learning than my impressions, or unverified personal gnosis if you prefer; but I will say this about greater celandine.

I was out on a walk the other day, through the old, historic part of town, and, since I've been thinking about herbs and plants a lot recently, I was paying quite a bit of attention to the plants at the side of the road. I saw no greater celandine, though it is all over my own yard.

Until, that is, I came to a house, one that is in serious disrepair, though it is still lived in. It is literally shuttered, and where there are no shutters the blinds are lowered; and the yard itself is all overgrown. I suspect, because I just have a sense for these things, that the person who lives there is a hoarder. And her yard was full of the stuff, like mine, like this hoarded yard my sister and I have been cleaning for several years now. Escape from imprisonment and entrapments, says Cunningham. There is a reason, I think, that it has caught my attention just now.

A Wiccan Formulary and Herbal, by A.J. Drew
Posted by Thalia at 8:48 PM

Actually I suppose you could say that greater celandine brings attention to neglect, and offers itself up as key to escape that neglect. Something like that.