C Is For Cinquefoil

So, in The Temple of Shamanic Witchcraft, which year-and-a-day course I've been following along with, one of the visions takes you to your Inner Temple.

Mine turned out to be a small square building with a column at each corner and a perfectly hemispherical dome leafed in gold; inside was a main room, the same size, more or less, as the outside, maybe thirty by thirty feet.

Of course though there were rooms off it and it was as they say bigger on the inside than the outside. One of those rooms lead to a library.

When I stepped into the library I caught a flash of a small yellow flower with five petals. Something little, and wild; it looked like a rose, or a primrose, maybe. Though if it was a rose it was a species rose, not a hybrid; maybe Father Hugo's rose, though that yellow is on the pale side.

I've done some gardening, though it is a damned frustrating experience in this yard what with the abundance of groundhogs and deer, not to mention both wild rabbits and the giant domestic one from across the street who keeps getting out of his cage and hanging out in my yard. My neighbor, like Ratty, may not be the brightest bulb; half the time when he comes over to retrieve his rabbit, he brings his dog. Because the surest way to coax a rabbit to come walking up to you is to bring a wolf with you. We've taken to calling the neighbor Mr. Fudd, as the rabbit is obviously smarter; the rabbit herself I'm calling Cunny, after the old pronunciation of coney.

Anyway. I have not, in this Witchy journey of mine, so far done much with herbs and plants, though last season I did manage a functional herb garden. It hasn't been my field, I suppose, and it's a little intimidating as I know it's just a huge subject. At any rate I have never sat down and tried to commune with plants.

And I'm not sure it's the season to try. Most everything is asleep, up here in New England, I'd think; it strikes me as the height of rudeness to go knocking on doors waking things up to say Oh hey tell me about yourself okay? So I'll wait on that, I think.

But I can at least look up some book-learning. I think the plant I saw is cinquefoil. I know it grows wild around here; I've seen its little yellow flowers about my yard as long as I can remember.

It's called potentilla, in the Latin, cinquefoil is. That name, as you may have guessed, means powerful. 'Cinquefoil' itself means 'five-leaved' and refers to the way the leaflets are arranged in a cluster like the five fingers of a hand. An older name, tormentilla, from the Spanish, means 'little torment', as in, it relieves little pains; and medicinally it was used to relieve stomach ache and diarrhea.

Here's a picture of it, courtesy of Wikipedia: 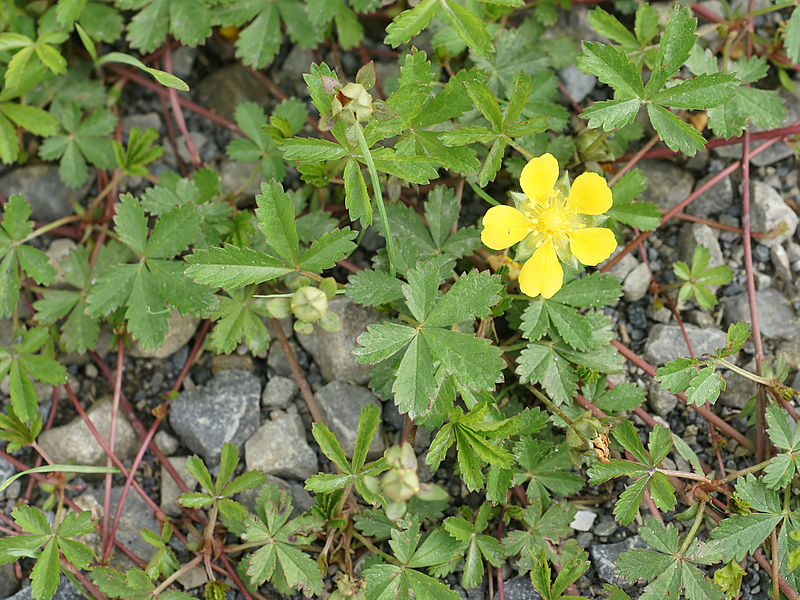 Photo by Hans Hillewaert
It's a very, very familiar plant. I know I have yanked it out of my cultivated garden on more than one occasion. Was that rude?

It is also known as five-leaved grass, or five-fingered grass. Culpeper (1653) says it is an herb of Jupiter, good for treating the quinsey, sciatica, St. Anthony's fire, and the bloody flux; mainly though he says it is good for inflammation and fevers 'whether infectious or pestilential,' and gives several ways to take it, usually by boiling it in wine to make a sort of tea.

I know I have seen plenty of cultivated varieties under the name potentilla; I think, come spring, I shall see how many of them I can find, to put in my garden. Then I shall sit down and see what they tell me. I'm interested in seeing how the wild version of a plant differs from a cultivated hybrid in what it has to say.

At the very least, I know it has said hello.

I know how you feel about gardening! It is a huge daunting subject for sure... I had St Anthony's Fire once, it has another name now, but it is a skin infection that burns with loads of tiny little blisters. Wish I had known about cinquefoil at the time. Anything to help speed something like that up....

Is the number 5 significant in or to your life? Perhaps there's a connection there.

Next time Mr. Fudd comes searching after Cunny, you must tell him to be vewy, vewy quiet while hunting rabbits.

Oh no don't encourage me. It takes all my strength as it is not to call the guy 'Elmer' to his face!

And oof, Rose, that sounds awful!

There is a Tormentil spell in Paul Huson's "Mastering Witchcraft". It's in the chapter "Spells for Lovers", but what it actually does is "makes [someone] subject to [the caster's] will".