Oh Ratty. Oh, oh Ratty. How on Earth did you manage this: 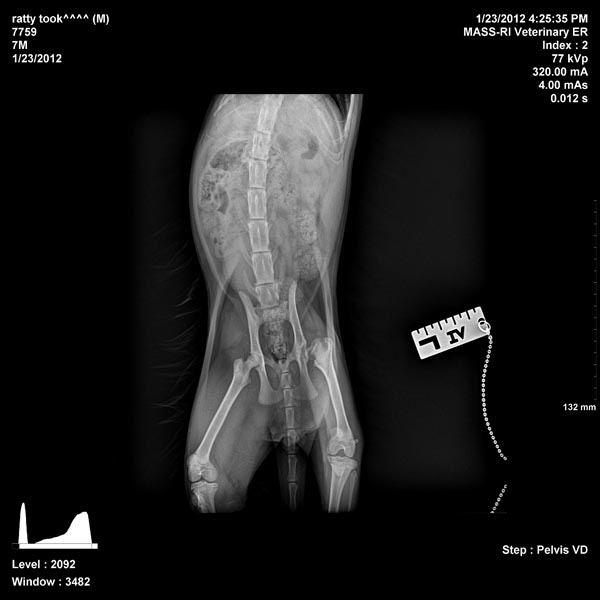 Let's get a bit of a close up: 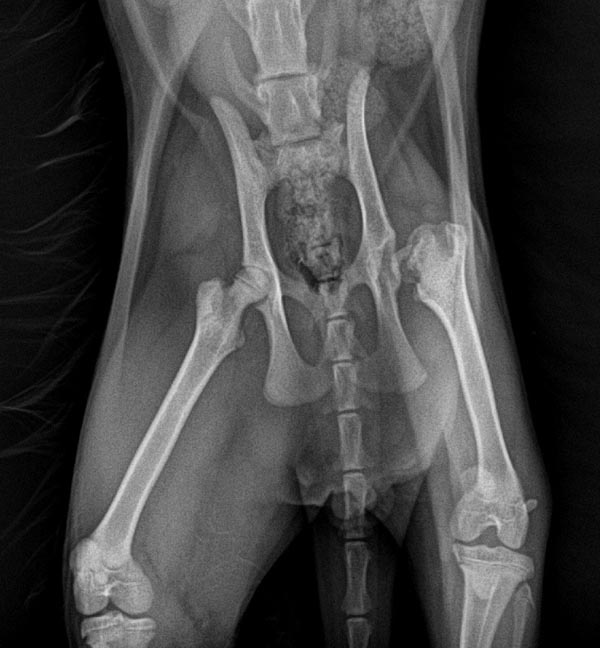 Even a layperson such as myself can tell that that left hip-joint (his left, our right) is seriously out of whack. One of the vets I talked to today said she doesn't usually see something like that without some serious trauma—being hit by a car, falling out of a third storey window. Not that Ratty (or any of them) go outside, of course. Last week I did hear a loud crash coming from the cellar; when I got there though, not a single thing was out of place save an empty laundry basket, which was tipped on its side. All four of them just sat there looking at me with their heads tilted, wide-eyed, innocent, calm.

He'd been limping a little since about last Wednesday or Thursday, but he let me poke around and move his leg a bit. Silly me I didn't follow it up the rest of his leg until Saturday night, when I did finally notice that there was a big lump on the same side up by his hip (I couldn't really see it because of the fur; he's long-haired and fairly fluffy). And guess what—that turned out to be the head of his femur in a place it really shouldn't be, namely, completely out of the hip-socket by something like an inch and a half. Though otherwise he had seemed more than fine—despite the little bit of a limp he was running around, jumping up on things, frisking with his brothers like a crazy kitten, and purring up a storm as usual. Even today, when one of the vets (there were several) went to listen to his heartbeat, she had to put his heart rate down as 'purr'.

So Ratty gets to spend the next couple days in a cage, which he doesn't much like, keeping off it until he has his scheduled surgery on Thursday. Where they will, and this is completely counterintuitive, actually chop off the ball of the femur and just let the end of the bone rest in the socket. I know. I would have thought that putting it back in would be the right way round, but the vet said if they did that it would be prone to just popping out again. I guess something must be permanently damaged. Of course I was like well won't one of his legs be shorter than the other then? The vet said no, actually; he'll be pretty much completely normal, running around again in no time.

So that's all good, if don't-even-ask pricey. But there's nothing for it, of course; rest and home remedies aren't going to cure something like that.

My cat Her Royal Highness dislocated a toe once by jumping off a shelf. We rushed her to the vet who was able to pop it back in. She's been fine ever since (HRH, I mean, altho I'm sure the vet is well too).

oh poor Ratty! Good that he is keeping his spirits up though! Shall be thinking of him...